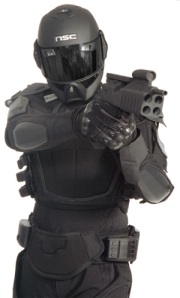 Soldiers could have their minds plugged directly into weapons systems, undergo brain scans during recruitment and take courses of neural stimulation to boost their learning, if the armed forces embrace the latest developments in neuroscience to hone the performance of their troops
The report’s authors also anticipate new designer drugs that boost performance, make captives more talkative and make enemy troops fall asleep.

Some techniques used widely in neuroscience are on the brink of being adopted by the military to improve the training of soldiers, pilots and other personnel.