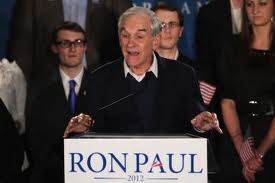 What the outspoken Texas Republican meant was fascist corporatism – an economic model most prominently seen in Mussolini’s Italy of the 1920s to the 1940s. Fascist economic corporatism involved government and private management of full sectors of the economy – which Paul says is par for the course in today’s America.

We’ve slipped away from a true republic. Now we’re slipping into a fascist system where it’s a combination of government, big business and authoritarian rule, and the suppression of the individual rights of each and every American citizen.”

The presidential hopeful echoed words already once delivered to the American people – by their president. Dwight Eisenhower said, in his farewell address to the nation, “In the councils of government, we must guard against the acquisition of unwarranted influence, whether sought or unsought, by the military-industrial complex. The potential for the disastrous rise of misplaced power exists and will persist.”

The disastrous rise, it seems, has happened. In 2009 alone, the United States was responsible for almost half of the world’s total military spending – 46 per cent, or 712 billion US dollars. Since then, the figures have only grown, to the point that American military spending now exceeds that of China, Russia, Japan, India, and the rest of NATO combined. The US has more than 700 military bases in 130 countries around the world.