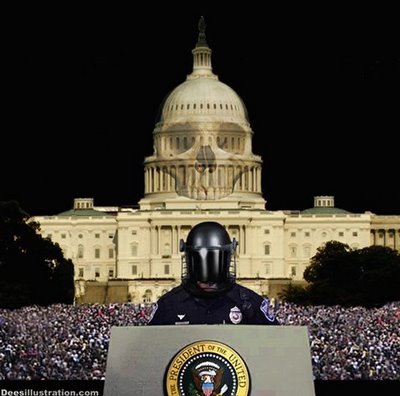 The United States has experienced the biggest political upheaval in its recent history: the transformation of a burgeoning welfare state into a rapidly expanding, highly intrusive and deeply entrenched police state, linked to the most developed technological innovations.

The ‘Great Transformation’ occurred exclusively from above, organized by the upper echelons of the civil and military bureaucracy under the direction of the Executive and his National Security Council. The ‘Great Transformation’ was not a single event but a process of the accumulation of powers, via executive fiats, supported and approved by compliant Congressional leaders. At no time in the recent and distant past has this nation witnessed the growth of such repressive powers and the proliferation of so many policing agencies engaged in so many areas of life over such a prolonged period of time (a time of virtually no internal mass dissent). Never has the executive branch of government secured so many powers to detain, interrogate, kidnap and assassinate its own citizens without judicial restraint.

Police state dominance is evident in the enormous growth of the domestic security and military budget, the vast recruitment of security and military personnel, the accumulation of authoritarian powers curtailing individual and collective freedoms and the permeation of national cultural and civic life with the almost religious glorification of the agents and agencies of militarism and the police state as evidenced at mass sporting and entertainment events.