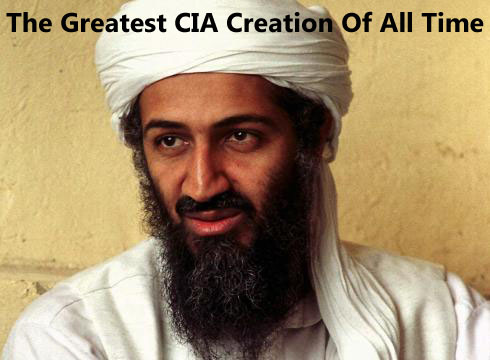 It’s funny how the accounts of this modern day fairy tale, have changed, time and time again. what you are not told is that Osama Bin Laden(AKA Tim Osman) was a CIA Asset prior to 9/11. The urban legend boogeyman of Osama Bin Laden, was a convienent scape goat for launching the Non-Stop “War on Terror”. In fact OBL, by all accounts was already dead prior to this Psy-op.

A firsthand account of the Navy SEAL raid that killed Osama bin Laden contradicts previous accounts by administration officials, raising questions as to whether the terror mastermind presented a clear threat when SEALs first fired upon him.
Bin Laden apparently was hit in the head when he looked out of his bedroom door into the top-floor hallway of his compound as SEALs rushed up a narrow stairwell in his direction, according to former Navy SEAL Matt Bissonnette, writing under the pseudonym Mark Owen in ‘No Easy Day.’ The book is to be published next week by Penguin Group (USA)’s Dutton imprint.

Bissonnette says he was directly behind a ‘point man’ going up the stairs in the pitch black hallway. ‘Less than five steps’ from top of the stairs, he heard ‘suppressed’ gunfire: ‘BOP. BOP.’ The point man had seen a ‘man peeking out of the door’ on the right side of the hallway.

The author writes that bin Laden ducked back into his bedroom and the SEALs followed, only to find the terrorist crumpled on the floor in a pool of blood with a hole visible on the right side of his head and two women wailing over his body.
Bissonnette says the point man pulled the two women out of the way and shoved them into a corner and he and the other SEALs trained their guns’ laser sites on bin Laden’s still-twitching body, shooting him several times until he lay motionless.
The SEALs later found two weapons stored by the doorway, untouched, the author said.

Director Steven Spielberg and HBO co-president Richard Plepler have both met with the Navy SEAL to discuss turning the book into a movie…..How Convenient

How long will this continue, and how many insiders are going to come out to warn the American people that this is happening right behind their back? The obvious trend here is that complete control and surveillance of the populace is the end goal.This is not about ensuring your safety, catching “terrorists” or protecting your civil rights. it’s about Complete control, who needs a New World Order Police State? When the infrastucture is being built right here in the “land of the free”

A former decorated undercover FBI agent, Mike German, explains how the national security state, in league with local law enforcement, is secretly targeting Americans for political views and activities perceived as a threat to the political establishment. German concentrates on the constitutional abuses of fusion centers and cites the Missouri Information Analysis Center report targeting Ron Paul and Chuck Baldwin as rightwing terrorists and the 2009 Virginia Terrorism Threat Assessment, produced by the Virginia Fusion Center, that singled out political groups as terrorist threats.

German notes that local law enforcement is now used as a weapon against anti-establishment politicians, activists and political organizations – in short, state and local law enforcement is now fully integrated into a larger political secret police apparatus. Efforts by the Department of Homeland Security, the FBI, military intelligence and other agencies, including the CIA, in league with private sector contractors, have produced a surveillance state culture and foundation that rivals that created by East Germany’s Stasi.

Ground based drones and micro surveillance helicopters are being used at the Repulican National convention and soon will be available to your local police department. The first of these drones called “The Wraith” which looks like an all-terrain vehicle without the seat and steering wheel can travel at speeds of up to 65MPH and comes with twin 12 gauge shotguns that are belt-fed allowing them to shoot up to 250 Rounds.

The second drone is called “Aether-Aero” it’s a quad blade helicopter that is used for surveillance and spying on you. The drones are also equipped to fire smoke canisters and have cameras to take pictures of dissidents

One more example of “Pre-Crime” technology being put into place, to tighten down the control grid on citizens, who have the audacity to think that they have the right to say and go where they want. Just remember this all here to protect you from “terrorist’s”

‘The Tampa Police Department will deploy dozens of ‘behavior recognition’ surveillance cameras at the Republican National Convention later this month, with the cameras remaining in place and more being added after the event finishes.

“The police department in Tampa, FL, is deploying behavioral recognition software from BRS Labs on dozens of the video cameras that will provide round-the-clock surveillance at many of the venues where the GOP national convention will take place August 27-30,” reports Government Security News.

The cameras work by using a software program called AISight 3.0, which is pre-programmed to acknowledge what behaviors are considered “normal” and then report any “suspicious activity” if it is spotted to police headquarters.’ The Houston-based company’s AISight software has the ability to capture and process video images over a long period of time, and use a form of artificial intelligence to “learn” what activities are deemed normal and what atypical activities should be considered abnormal.

The AISight 3.0 software has been deployed on cameras in Tampa for more than a month, said Frazzini, so they are already beginning to “learn” which activities in and around the convention venues should be considered routine.After the convention is over, he expects the Tampa police department to continue deploying his company’s behavior recognition software in an expanded footprint.

First.. the fact that we have an interior security force called the “homeland” security is disturbing. I grew up never reffering to or hearing of the U.S. reffered to as “the homeland”. Which to me reminds me of Nazi propaganda ( Die Vaterland). It’s no surprise that Big government is corrupt to the core, but for those who think that this is put into place for your “national security” I hope this shatters those illusions.

According to a newly released DHS inspector general’s summary of its significant investigations, 318 DHS employees and contractors were arrested in 2011. That’s about one arrest per weekday of the men and women who are supposed to be keeping the country safe. The report lets us not only see how corrupt some agents tasked with protecting the homeland can be, it also gives us a scale of the problem. In short: There are a lot of dirty immigration and border officers.

Border corruption may take the form of cash bribes, sexual favors, and other gratuities in return for allowing contraband or undocumented aliens through primary inspection lanes or even protecting and escorting border crossings; leaking sensitive law enforcement information to persons under investigation and selling law enforcement intelligence to smugglers; and providing needed documents such as immigration papers,” Charles Edwards, the acting inspector general for DHS, told Congress earlier this month.

If you don’t think that the U.S. is slipping into a police state, take a look at what’s happening everyday. Cops shooting people documents daily the abuses of police “Necessary force”. All too often these situations could have gone in a different direction, If it were’nt for the cops being so trigger happy.

Episode 21: The Reality of Unreality 08/24 by CriticalConvo | Blog Talk Radio.

On August 16th former US Marine Brandon Raub was arrested for posting his opinion about the US government on his Facebook page .

Raub is currently being held in a psychiatric ward.

In a statement by Raub, he explains : “I’m currently in John Randolph in the psychiatric ward being held against my will. They were concerned about me calling for the arrest of government officials.”

Raub’s lawyers say that he will be held for “up to 30 days’ further confinement in a VA psych ward” after “government officials again pointed to Raub’s Facebook posts as the sole reason for their concern and for his continued incarceration.” While Raub was taken forcefully, put into handcuffs and taken by the FBI to be questioned, both the FBI and Secret Service deny that Raub was arrested or detained by them.

Facebook comments were recently cited as evidence in a court case concerning cyber bullying where comments on a personal page were ruled by a US Federal court as information that can be lawfully obtained by the police to be used against a defendant.

William Pauley, US District Court Judge, stated that because the defendant made violent threats in his posts which are deemed public information that they are allowable as evidence against him by prosecutors.

On April 24th, District Judge Raymond Jackson ruled that by clicking a “like” button on Facebook, that this affiliation is public domain and not protected by the 1st Amendment. Jackson wrote : “Simply liking a Facebook page is insufficient.