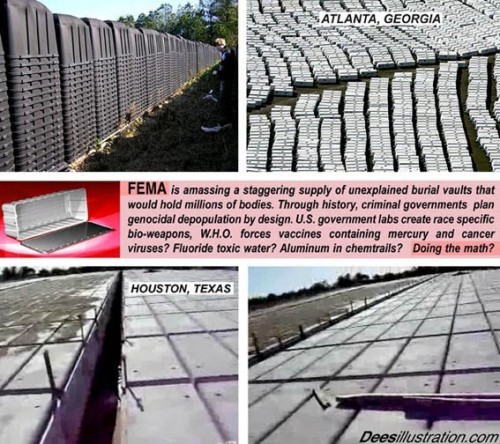 So hope this is all starting to make sense now? With not one major terror plot foiled by the TSA in 11 years. and the number of Americans actually killed in Terrorist attacks down in the last 2( from 17 people to 15). The fact that the federal government is amassing weapons, ammo, food, and putting in place a martial law surveillance system, complete with robotic drones along side returning homicidal US soldiers with PTSD, should be a cause for concern for anyone paying attention

Last month, the US House of Representatives passed HR 6566 which is an amendment of the Homeland Security Act of 2002 that imbues the Administrator of the Federal Emergency Management Agency (FEMA) “to provide guidance and coordination for mass fatality planning, and for other purposes.”

In the anticipated event of a “mass fatality”, coordination and planning must be forefront of FEMA with the assistance of the Department of Homeland Security (DHS) as referred by the Committee on Transportation and Infrastructure (CTI). In the event that the Executive Branch or Congress declares a mass disaster caused by nature, a domestic terrorist attack, or any other man-made catastrophe, there must be a national plan to prepare for and respond to the incident.

Elected officials assume that in such an event, funeral homes, cemeteries and mortuaries would be overwhelmed should millions of Americans suddenly die in a tragic event. There must also be allowances for survivors of such an event.

Representatives from local and state governments must coordinate with federal agencies, private sector businesses, non-profit organizations and appropriate individuals to prepare and respond to an incident wherein mass casualties occur.

Janet Napolitano, Secretary of DHS explains that “we’re all safer when everyone is alert and engaged” and she wants the American public to spy on each other because our continued safety is “a shared responsibility”.

The DHS has been amassing an estimated 1.8 billion rounds of hollow point bullets through their agency; as well as the Social Security Office, the National Oceanic and Atmospheric Association (NOAA), and the US Forest Service and other federal agencies. These solicitations have spawned great debate as to who the US government intends to shoot.