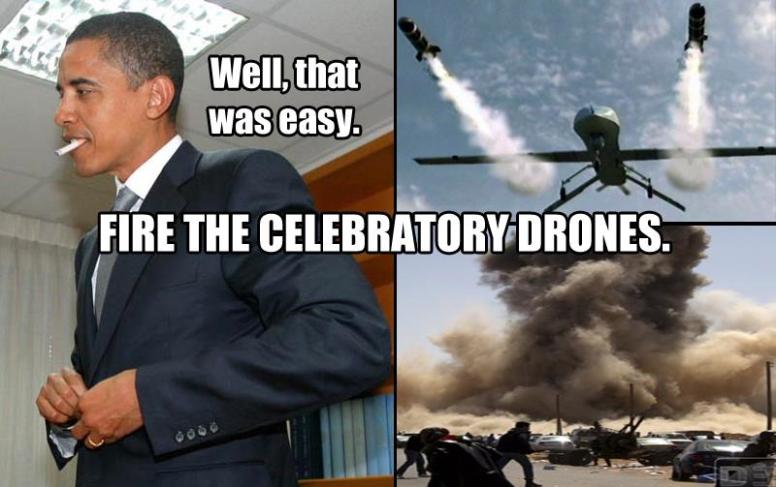 Now that the bullshit election Popularity contest is over with, its back to business as usual. Marching towards a Technocractic Facist Police State , that is!!! Aren’t you glad that your vote counts, to elect a president who has designated “kill Lists” of dissident’s …Er I mean “terrorists” to take care of. The Drone’s, The surveillance, The troops and police with weapons pointed in your face, They’re all here in the U.S. The War is expanding, and hitting it’s intended targets….YOU!

Robotic assassination campaigns directed from the Oval Office. Cyber espionage programs launched at the president’s behest. Surveillance on an industrial scale. The White House already has an incredible amount of power to monitor and take out individuals around the globe. But a new wave of technologies, just coming online, could give those powers a substantial upgrade.

The current crop of sensors, munitions, control algorithms, and data storage facilities have helped make the targeted killing of American adversaries an almost routine affair. Nearly 3,000 people have been slain in the past decade by American drones, for instance. The process will only get easier, as these tools of war become more compact, more powerful, and more precise.

For decades, political scientists have wrung their hands about an “Imperial Presidency,” an executive branch with powers far beyond its original, Constitutional limits. This new hardware and software could make the old concerns look more outdated than horses and bayonets, to coin a phrase. Here are seven examples.

-Drone Autonomy:There’s a standard response to skeptics of the killer flying robots known as drones that goes something like this: Every time a drone fires its weapon, a human being within a chain of command (of other human beings) made that call. The robot never decides for itself who lives and who dies. All of that is true. It’s just that some technical advances, both current and on the horizon, are going to make it less true

-City-Sized’ Surveillance: Tomorrow’s sensors, will be able to monitor an area 10 times larger with twice the resolution. The Autonomous Real-time Ground Ubiquitous Surveillance Imaging System (“Argus, for short) is a collection of 92 five-megapixel cameras. In a single day, it collects six petabytes of video — the equivalent of 79.8 years’ worth of HD video.

-Massive Data Storage: The idea of the government watching your every move is frightening. But not as frightening as the government recording your every move in digital database that never gets full.
This nightmare data storage scenario is closer than you think. A study from the Brookings Institute says that it will soon be within the reach of the government — and other organizations — to keep a digital record everything that everyone in the country says or does, and the NSA is clearly on the cutting edge of large-scale data storage.