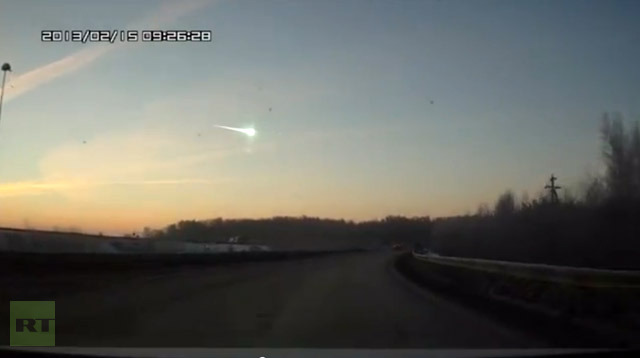 A series of explosions in the skies of Russia’s Urals region, reportedly caused by a meteor shower, has sparked panic in three major cities. Witnesses said that houses shuddered, windows were blown out and cellphones stopped working.

Atmospheric phenomena have been registered in the cities of Chelyabinsk, Yekaterinburg and Tyumen.

Witnesses said the explosion was so loud that it resembled an earthquake and thunder at the same time, and that there were huge trails of smoke across the sky. Others reported seeing burning objects fall to earth.

Office buildings in downtown Chelyabinsk are being evacuated. Injuries were reported at one of the city’s secondary schools, supposedly from smashed windows

According to preliminary data, the flashes seen over the Urals were caused by [a] meteorite shower,” the Emergency Ministry told Itar-Tass news agency.

Many locals reported that the explosion rattled their houses and smashed windows. Many speculated on what caused the powerful explosion – some claimed it was a crashed plane, while others said it could have been a UFO.

it is believed that the incident may be connected to asteroid 2012 DA14, which measures 45 to 95 meters in diameter and will be passing by Earth tonight at around 19:25 GMT at the record close range of 27,000 kilometers.

*(Pretty interesting that there have been 3 Near earth Asteroids in the past 4 months, along with numerous reports of meteorites, such as this one.)