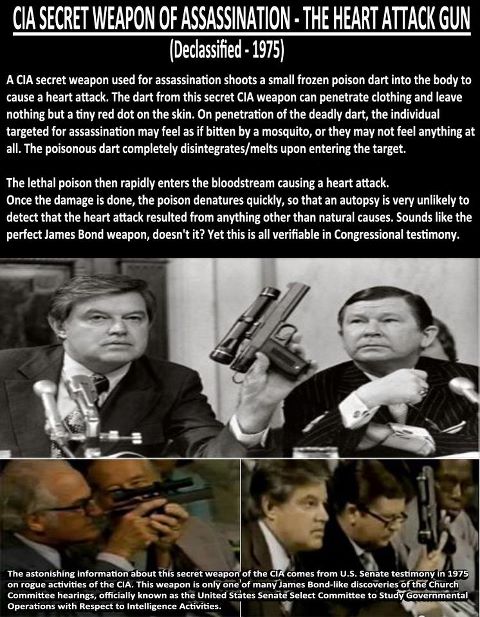 In 1975, during the Church Committee hearings, the existence of a secret assassination weapon came to light. The CIA had developed a poison that caused the victim to have an immediate heart attack. This poison could be frozen into the shape of a dart and then fired at high speed from a pistol. The gun was capable of shooting the icy projectile with enough speed that the dart would go right through the clothes of the target and leave just a tiny red mark. Once in the body the poison would melt and be absorbed into the blood and cause a heart attack! The poison was developed to be undetectable by modern autopsy procedures.

Can you give a person cancer?

If cancer in animals can be caused by injecting them with cancer viruses and bacteria, it would certainly be possible to do the same with human beings!

In 1931, Cornelius Rhoads, a pathologist from the Rockefeller Institute for Medical Research, purposely infects human test subjects in Puerto Rico with cancer cells; 13 of them died. Though a Puerto Rican doctor later discovers that Rhoads purposely covered up some of the details of his experiment and Rhoads himself gives a written testimony stating he believes that all Puerto Ricans should be killed, he later goes on to establish the U.S. Army Biological Warfare facilities in Fort Detrick Maryland and is named to the U.S. Atomic Energy Commission, where he begins a series of radiation exposure experiments on American soldiers and civilian hospital patients.

The answer to the question – Can you give a person cancer – is yes. After nearly 80 years of research and development there is now a way to simulate a real heart attack and to give a healthy person cancer. Both have been used as a means of assassination.

Is death by heart attack, burst aneurysm, of cerebral hemorrhage a “natural cause”? Not if government agencies have found a way to influence your heart rate, blood pressure, or vascular dilatation. Neurological research has found that the brain has specific frequencies for each voluntary movement called preparatory sets. By firing at your chest with a microwave beam containing the ELF signals given off by the heart, this organ can be put into a chaotic state, the so-called heart attack. In this way, high profile leaders of political parties who are prone to heart attacks can be killed off before they cause any trouble( See: Hugo Chavez, Slobodan Milosevic , etc).

Mr. Charles Senseney, a CIA weapon developer at Fort Detrick, Maryland, testified before the Senate Intelligence Committee in September 1975 where he described an umbrella poison dart gun he had made. He said it was always used in crowds with the umbrella open, firing through the webing so it would not attract attention. Since it was silent, no one in the crowd could hear it and the assassin merely would fold up the umbrella and saunter away with the crowd.

Video footage of the assassination of John F Kennedy shows this umbrella gun being used in Dealey Plaza. Video evidence of the events of November 22, 1963 shows that the first shot fired on the fateful day had always seemed to have had a paralytic effect on Kennedy. His fists were clenched and his head, shoulders and arms seemed to stiffen. An autopsy revealed that there was a small entrance wound in his neck but no evidence of a bullet path through his neck and no bullet was ever recovered that matched that small size.