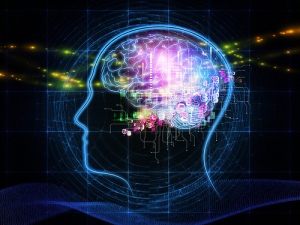 The next frontier for the robotics industry is to build machines that think like humans. Scientists have pursued that elusive goal for decades, and they believe they are now just inches away from the finish line.A Pentagon-funded team of researchers has constructed a tiny machine that would allow robots to act independently. Unlike traditional artificial intelligence systems that rely on conventional computer programming, this one “looks and ‘thinks’ like a human brain,” said James K. Gimzewski, professor of chemistry at the University of California, Los Angeles.

Gimsewski is a member of the team that has been working under sponsorship of the Defense Advanced Research Projects Agency on a program called “physical intelligence.” This technology could be the secret to making robots that are truly autonomous. This project does not use standard robot hardware with integrated circuitry, he said. The device that his team constructed is capable, without being programmed like a traditional robot, of performing actions similar to humans.

What sets this new device apart from any others is that it has nano-scale interconnected wires that perform billions of connections like a human brain, and is capable of remembering information,Each connection is a synthetic synapse. A synapse is what allows a neuron to pass an electric or chemical signal to another cell. Because its structure is so complex, most artificial intelligence projects so far have been unable to replicate it.

A “physical intelligence” device would not require a human controller the way a robot does, said Gimzewski. The applications of this technology for the military would be far reaching.

* (Once again the cutting edge of technology, is in the hands of the Military/Corporate Industrial complex. Artificial Intelligence and Robotics are the biggest developments of the 21st century, and it is being developed and funded by interests that have an agenda for global domination.)