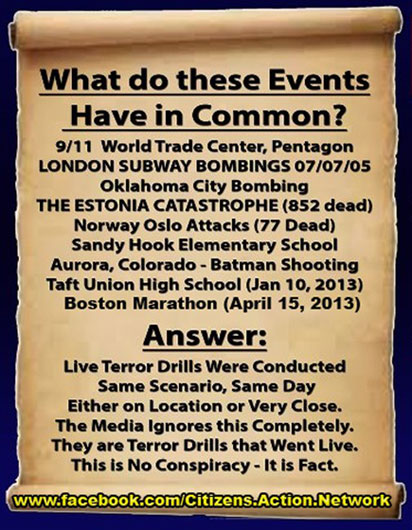 Either Every Major terrorist attack of the last 30 years was skillfully executed on the exact day’s and times that terrorism drills were being held, (which would constitute more than one instance of coincidence) Or these events were skillfully orchestrated by the same people planning the “Terrorism Drills” I’ll let you decide.

On 9/11, an agency of the Department of Defense and the CIA was conducting a terror scenario in which an imaginary airplane from Washington’s Dulles International Airport was to crash into one of the four towers of the suburban campus of the National Reconnaissance Office (NRO) in Chantilly, Virginia, just a few miles from the Pentagon. The plane that allegedly crashed into the Pentagon, American Airlines Flight 77, departed from the same airport at 8:20 a.m. on 9/11.

As the agency that operates the nation’s spy satellites, the NRO personnel come from the military and the CIA. When the attacks occurred, however, most of the three thousand people who work at the agency were sent home. Why would they do that?

At the exact time of the terror bombings of the London Underground and a bus at Tavistock Square, a man named Peter Power was, with his crisis management company, Visor Consultants Ltd., conducting a terrorism drill for a mysterious un-named client.

The Visor exercise was precisely identical to the bombings that occurred. Just how likely is such a coincidence? Peter Power had previously worked at Scotland Yard, the Anti Terrorist Branch, and as a police superintendent in West Dorset, England. In 1993, Power was himself the subject of a criminal investigation which, in April 1993, led to his suspension and retirement from the police.

Just hours after the London bombings, Power explained the incredible coincidences with the drill his company was conducting in a radio interview with Peter Allen on BBC 5:

Power: “At half past nine this morning we were actually running an exercise for a company of over a thousand people in London based on simultaneous bombs going off precisely at the railway stations where it happened this morning, so I still have the hairs on the back of my neck standing up right now”.

Power: “Precisely, and it was about half past nine this morning, we planned this for a company and for obvious reasons I don’t want to reveal their name but they’re listening and they’ll know it.”

On May 23, the day the federal building was demolished, Edye Smith, in a live interview on CNN, stated, “There’s a lot of questions that have been left unanswered. We’re being told to keep our mouths shut, not to talk about it, don’t ask those questions…”

CNN’s Gary Truchmann asked Smith to describe the nature of the questions.

“We, along with hundreds of thousands of other people want to know, where was the ATF the morning of April 19th? All of their employees survived. They were supposed to be the target of this explosion and where were they…? Did they have a warning sign? I mean, did they think it might be a bad day to go in the office?”