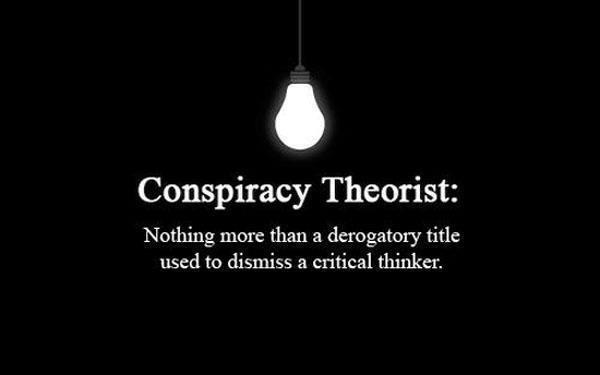 What does the mainstream media do when they don’t want to discuss a real issue that diverts away the topic from political theater? Simply deem it a wild ‘conspiracy theory’ and pretend it doesn’t exist.

It’s a tried and true method. It has worked for a long line of question-dodging politicians, with both Bush and Obama speaking out against ‘conspiracy theories’ and those who warn against corruption and tyranny in government. Obama recently spoke to the graduating class of Ohio State University and repeated such warnings. He told the class to ignore and reject those warning of government tyranny, and went on to praise the new United States government system he called ‘brave’ and ‘unique’.

And anyone who decides to attack this ‘brave and unique’ government, or anyone who even questions reports by the government? They must be conspiracy nuts.

The easiest way to deal with real issues certainly isn’t to refute the questions or discuss the information. No, it’s to brand those asking questions as conspiracy theorists. That, or just censor them altogether. Even Google employees have issued warnings on the official company blog regarding the continued requests initiated by governments around the globe to ‘pull’ content from Google’s massive search and blog service.

But of course we must ask: What do they have to fear? I mean after all, if the questions asked regarding the mega banks admittedly funding the Mexican drug cartels and terror cells are fake (even though NBC reports it’s confirmed along with other news sources), then why be worried? If it’s all just ‘conspiracy’ bunk, then it sure would be easy to go ahead and dispel the rumors once and for all.