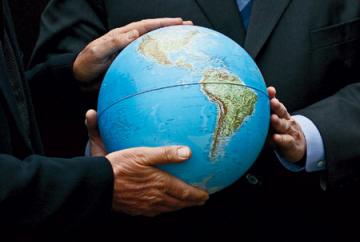 So, who runs the world? It’s a question that people have struggled with since people began to struggle. Often, it is relegated to the realm of “conspiracy theory,” in that, those who discuss this question or propose answers to it, are purveyors of a conspiratorial view of the world.
What is intend is to analyse the social structure of the transnational ruling class, the international elite, who together run the world. This is not a conspiratorial opinion piece, but is an examination of the socially constructed elite class of people; what is the nature of power, how does it get used, and who holds it?

A Historical Understanding of Power:

[T]he powers of financial capitalism had another far-reaching aim, nothing less than to create a world system of financial control in private hands able to dominate the political system of each country and the economy of the world as a whole. This system was to be controlled in a feudalist fashion by the central banks of the world acting in concert, by secret agreements arrived at in frequent private meetings and conferences.

The central banks, and thus the central banking system as a whole, is a privately owned system in which the major shareholders are powerful international banking houses.

Constructing a Ruling Class: Rise of the Think Tanks:

The top think tanks in the United States include the Council on Foreign Relations, (which was put at number 2, however, should be placed at the number 1 spot), the Brookings Institution, (which was inaccurately given the position of number one), the Carnegie Endowment for International Peace, RAND Corporation, Heritage Foundation, Woodrow Wilson International Centre for Scholars, the Center for Strategic and International Studies, and the American Enterprise Institute, among others.

In 1954, the Bilderberg Group was founded in the Netherlands. Every year since then the group holds a secretive meeting, drawing roughly 130 of the political-financial-military-academic-media elites from North America and Western Europe.Regular participants include the CEOs or Chairmen of some of the largest corporations in the world, oil companies such as Royal Dutch Shell, British Petroleum, and Total SA, as well as various European monarchs, international bankers such as David Rockefeller, major politicians, presidents, prime ministers, and central bankers of the world. These think tanks have effectively socially constructed an ideologically cohesive ruling class in each nation and fostered the expansion of international ideological alignment among national elites, allowing for the development of a transnational ruling class sharing a dominant ideology.