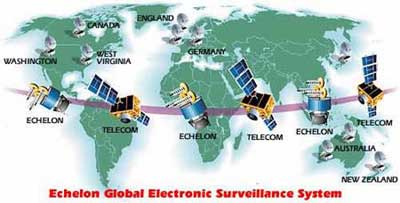 Via Michael Rivero/ What Really Happened

Rumors have abounded for several years of a massive system designed to intercept virtually all email and fax traffic in the world and subject it to automated analysis, despite laws in many nations (including this one) barring such activity. The laws were circumvented by a mutual pact among five nations. It’s illegal for the United States to spy on it’s citizens. Likewise the same for Great Britain. But under the terms of the UKUSA agreement, Britain spies on Americans and America spies on British citizens and the two groups trade data.

The system is called ECHELON, and had been rumored to be in development since 1947, the result of the UKUSA treaty signed by the governments of the United States, the United Kingdom, Canada, Australia and New Zealand. The purpose of the UKUSA agreement was to create a single vast global intelligence organization sharing common goals and a common agenda, spying on the world and sharing the data.

What is ECHELON used for?

In the days of the cold war, ECHELON’s primary purpose was to keep an eye on the U.S.S.R. In the wake of the fall of the U.S.S.R. ECHELON justifies it’s continued multi-billion dollar expense with the claim that it is being used to fight “terrorism”, the catch-all phrase used to justify any and all abuses of civil rights.

The cover blows off!

Even close allies do not like it when they are being spied on. Especially if the objective is not law enforcement but corporate shenanigans to make rich politicians just that much richer. So, the Civil Liberties Committee of the European Parliament looked into ECHELON, and officially confirmed it’s existence and purpose.

A European Commission report warns that the United States has developed
an extensive network spying on European citizens and we should all be
worried. Simon Davies reports

Cooking up a charter for snooping

A GLOBAL electronic spy network that can eavesdrop on every telephone,
email and telex communication around the world will be officially
acknowledged for the first time in a European Commission report to be
delivered this week.

The report – Assessing the Technologies of Political Control – was
commissioned last year by the Civil Liberties Committee of the European
Parliament. It contains details of a network of American-controlled
intelligence stations on British soil and around the world, that
“routinely and indiscriminately” monitor countless phone, fax and email
messages. The report confirms for the first time the existence of the secretive
ECHELON system.

“The ECHELON system forms part of the UKUSA system (Cooking up a
charter for snooping) but unlike many of the electronic spy systems
developed during the Cold War, ECHELON is designed primarily for
non-military targets: governments, organizations and businesses in
virtually every country.