At least 80% of all audio calls, not just metadata, are recorded and stored in the US, says whistleblower William Binney – that’s a ’totalitarian mentality’. William Binney is one of the highest-level whistleblowers to ever emerge from the NSA. He was a leading code-breaker against the Soviet Union during the Cold War but resigned soon after September 11, disgusted by Washington’s move towards mass surveillance. 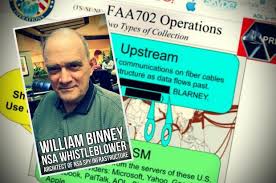 On 5 July he spoke at a conference in London organised by the Centre for Investigative Journalism and revealed the extent of the surveillance programs unleashed by the Bush and Obama administrations.

“At least 80% of fibre-optic cables globally go via the US”, Binney said. “This is no accident and allows the US to view all communication coming in. At least 80% of all audio calls, not just metadata, are recorded and stored in the US. The NSA lies about what it stores.

“The ultimate goal of the NSA is total population control”, Binney said, “but I’m a little optimistic with some recent Supreme Court decisions, such as law enforcement mostly now needing a warrant before searching a smartphone.”