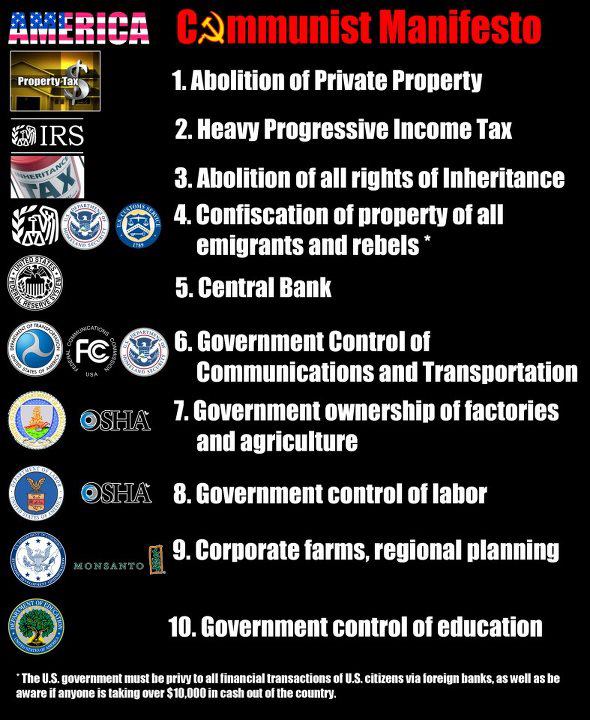 In 1848 Karl Marx and Frederick Engels wrote a book outlining a political ideology, titled “The Communist Manifesto”. Marxism’s basic theme is that the proletariat (the “exploited” working class of a capitalistic society) will suffer from alienation and will rise up against the “bourgeoisie” (the middle class) and overthrow the system of “capitalism.” After a brief period of rule by “the dictatorship of the proletariat” the classless society of communism would emerge.
Marx (A.K.A)Moses Mordecai Marx Levy, was a member of an Illuminati front organization called the League of the Just. He not only advocated economic and political changes; he advocates moral and spiritual changes as well. He believes the family should be abolished, and that all children should be raised by a central authority.
In his Manifesto Marx described the following ten steps as necessary steps to be taken to destroy a free enterprise society!! Notice how many of these conditions, foreign to the principles that America was founded upon, have now, been realized.

1. Abolition of private property in land and application of all rents of land to public purpose.

The courts have interpreted the 14th Amendment of the U.S. Constitution (1868) to give the government far more “eminent domain” power than was originally intended, Under the rubric of “eminent domain” and various zoning regulations, land use regulations by the Bureau of Land Management, property taxes, and “environmental” excuses, private property rights have become very diluted and private property in land, vehicles, and other forms are seized almost every day in this country under the “forfeiture” provisions of the RICO statutes and the so-called War on Drugs..

The 16th Amendment of the U.S. Constitution, 1913 allows the Congress to levy an income tax without apportioning it among the states or basing it on the United States Census. Paving the way for the creation of the Bureaucratic I.R.S.
these massive Federal taxes continue to siphon the life out of the American economy and greatly reduce the accumulation of desperately needed capital for future growth, business starts, job creation, and salary increases.

3. Abolition of all rights of inheritance.

Another Marxian attack on private property rights is in the form of Federal & State estate taxes and other inheritance taxes, which have abolished or at least greatly diluted the right of private property owners to determine the disposition and distribution of their estates upon their death.

4. Confiscation of the property of all emigrants and rebels.

We call it government seizures, tax liens, “forfeiture” Public “law” 99-570 (1986); Executive order 11490, sections 1205, 2002 which gives private land to the Department of Urban Development; the imprisonment of “terrorists” and those who speak out or write against the “government” or the IRS confiscation of property without due process.

5. Centralization of credit in the hands of the state, by means of a national bank with state capital and an exclusive monopoly.

The Federal Reserve System, created by the Federal Reserve Act of Congress in 1913, is indeed such a “national bank” and it politically manipulates interest rates and holds a monopoly on legal counterfeiting in the United States. The Federal Reserve itself is not a “Federal” institution but rather A government sanctioned private bank run for the profit of other private .

6. Centralization of the means of communication and transportation in the hands of the state.

In the U.S., communication and transportation are controlled and regulated by the Federal Communications Commission (FCC) established by the Communications Act of 1934 and the Department of Transportation and the Interstate Commerce Commission (established by Congress in 1887), and the Federal Aviation Administration as well as Executive orders 11490, 10999 — not to mention various state bureaucracies and regulations

7. Extension of factories and instruments of production owned by the state; the bringing into cultivation of waste lands, and the improvement of the soil generally in accordance with a common plan.

While the U.S. does not have vast “collective farms” (which failed so miserably in the Soviet Union), we nevertheless do have a significant degree of government involvement in agriculture in the form of price support subsidies and acreage alotments and land-use controls.As well as the Department of Commerce and Labor, Department of Interior, the Evironmental Protection Agency, Bureau of Land Management, Bureau of Reclamation, Bureau of Mines, National Park Service, and the IRS control of business through corporate regulations

8. Equal obligation of all to work. Establishment of Industrial armies, especially for agriculture.

We call it the Social Security Administration and The Department of Labor. The National debt and inflation caused by the communal bank has caused the need for a two “income” family. First labor unions, known as federations, appeared in 1820. National Labor Union established 1866. American Federation of Labor established 1886. Interstate Commerce Act of 1887 placed railways under federal regulation. Department of Labor, 1913. Labor-management negotiations sanctioned under Railway Labor Act of 1926. Civil Works Administration, 1933. National Labor Relations Act of 1935, stated purpose to free inter-state commerce from disruptive strikes by eliminating the cause of the strike. Works Progress Administration 1935. Fair Labor Standards Act of 1938, mandated 40-hour work week and time-and-a-half for overtime, set “minimum wage” scale. Civil Rights Act of 1964, effectively the equal liability of all to labor.

9. Combination of agriculture with manufacturing industries; gradual abolition of the distinction between town and country by a more equable distribution of the population over the country.

10. Free education for all children in government schools. Abolition of children’s factory labor in
its present form. Combination of education with industrial production, etc.

People are being taxed to support what we call ‘public’ schools, which train the young to work for the communal debt system. We also call it the Department of Education, the NEA and Outcome Based “Education” .
Gradual shift from private education to publicly funded began in the Northern States, early 1800’s. 1887: federal money began funding specialized education. Smith-Lever Act of 1914, vocational education; Smith-Hughes Act of 1917 and other relief acts of the 1930’s. Federal school lunch program of 1935; National School Lunch Act of 1946. National Defense Education Act of 1958,Federal school aid law passed, 1965, greatly enlarged federal role in education, “head-start” programs, textbooks, library books.