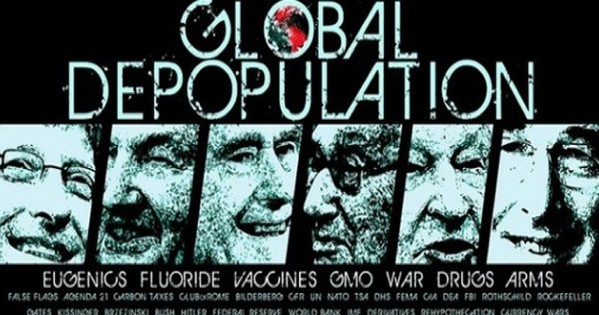 It is common knowledge that since the beginning of the last century, members of the global elite met and planned to exterminate the majority of humans on the planet. The reason for them to plan for such extermination is still being debated as it is also being debated whether they had the moral or political power to do it or not.

Among people who are aware about the depopulation plans there are those who say that globalists planned to exterminate most of us in order to achieve complete power, concentration of wealth and resources and that humans have been used throughout history as mere expendable resources that can now be disposed of.Meanwhile, others insist that the global elite met in secret and planned to depopulate the planet because they foresaw that uncontrolled growth of the human population along with the reality of limited resources and limited space to expand, would cause unimaginable societal fracturing.

When asked about the global depopulation plans, most people are clueless about the systematic culling being executed through the use of chemicals in food, vaccines, genetically modified organisms, and chemical spraying.According to researchers, some 2 billion people have been prevented from existing as a result of the extermination plans. These extermination plans are complemented with the illegal confiscation and centralized accumulation of wealth and resources that some believe will end up facilitating the equal redistribution once the global elite fully establish their one world government.

“We are paying for the sins of our fathers so that our children will not have to pay at even greater cost to their well-being than we are currently suffering because we chose to postpone the inevitable,” says researcher and writer, Kevin Galalae, Mr. Galalae, who has spend quite some time studying and writing about the depopulation plans, believes that after the end of the Second World War, the elite saw in depopulation the only solution left to the imminent collapse of human civilization and that the current mass extermination coupled with the equally massive confiscation of wealth, power and resources, are the only tool available to keep humanity sane and in balance with the environment.Mr. Galalae believes that the day is coming when a new step will have to be taken in order to further curb human population growth. That step may be or may include the release of a pathogen that ensures the massive annihilation of millions, perhaps billions of people worldwide.