In the wake of the wake of the Chatanooga “lone wolf terrorist” shooting. Former U.S. General Wesley Clark made headlines recently for an absurdly disquieting solution for citizens who “don’t support” the United States: Lock them up in internment camps as prisoners of war.
In fact, in the MSNBC interview, Clark even advocated a pro-America, pro-nationalist, Kafkaesque neighborhood watch program to root out America’s problem “radicals” and urge their return to the happy fog of unquestioned patriotism.

“We have got to identify the people who are most likely to be radicalized,” he warned. “We’ve got to cut this off at the beginning.”“I do think on a national policy level we need to look at what self-radicalization means because we are at war with this group of terrorists. They do have an ideology. In World War II, if someone supported Nazi Germany at the expense of the United States, we didn’t say that was freedom of speech, we put them in a camp. They were prisoners of war. So, if these people are radicalized and they don’t support the United States and they are disloyal to the United States, as a matter of principle, fine. It’s their right and it’s our right and obligation to segregate them from the normal community for the duration of the conflict.”

Clark’s egregiously flawed thinking belies astonishing arrogance considering the historical context. He essentially said: America imprisoned the innocent before so why should we bother with an ethical precedent now? To hell with what’s right. Why correct past mistakes when we can just use them as a blueprint? Why pretend to learn from the past when repurposing grievous errors is so easy?

Clark confirmed the existence of FEMA-style concentration camps to hold Americans for life sentences without a trial via the new tweet seen below in which he purposely says: “Never said ‘muslim’, ‘internment’ or called for NEW camps”. 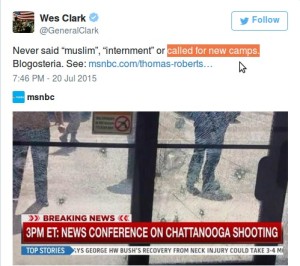 This is in addition to the comments Clark made about “Disloyal Americans” being rounded up and thrown into internment camps. which brings up the question,who gets to determine who gets sent to “the camps”.Does that include the criminals who have desecrated the US Constitution masquerading as politicians in Washington DC?

Should we forget as time imparts erasure in the collective memory that internment camps—as deplorable in concept as fact—were actually called concentration camps in President Roosevelt’s Executive Order 9066. While fighting the Nazis overseas, the U.S. government instituted a parallel regime on the homefront in fearful response to the attack on its fleet in Pearl Harbor. With a simple signature, Roosevelt transmogrified Japanese heritage from genetic happenstance to State enemy. Though genocide was not the stated function of these camps, the interned citizen-prisoners—whose only crime was ancestry—would have had amply confirmed arguments that the camps’ underlying purpose was death.

As has been previously reported, with shopping malls going up across America that look like they could be quickly turned into FEMA camps, maybe Clark was right in his tweet that he isn’t calling for any more “new” camps. That preparation has likely already being made, all across America. As Clark clearly tells us, he isn’t calling for any ‘new’ ones.