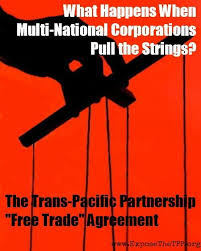 The Trans-Pacific Partnership (TPP) “is a key trade initiative” that the Obama administration claims is “seeking to support jobs for American workers by boosting American exports to the dynamic Asia-Pacific region, promote manufacturing, innovation, and entrepreneurship, and at the same time, reflect in the agreement important values on key issues such as worker rights and the environment.”

However, the agenda of the TPP is a securitization of customs and border patrol services, telecommunications, corporate competition policy that directly effects immigration, corporate investments, and the addition of intellectual property rights with focus on copyright limitations

The TPP, held in secret, is a multi-national trade agreement to extend intellectual property rights creating an international enforcement scheme.

In a White House statement , Obama seeks to incorporate America with Canada(The North American Union) and the other TPP countries in a “next-generation regional agreement that liberalizes trade and investment.” The press release explains that TPP will build upon “the commitments of NAFTA.”

Outsourcing, which was endorsed by NAFTA over a decade ago, would be enhanced under TPP, where manipulation of governments by mega-corporations could ensure profit margins increase exponentially.

There is an initiative to control global IP enforcement by the UN under signatory treaty wherein nations will be mandated to enact domestic laws that have been worded to reflect the provisions in the TPP agreement. Within TPP is an UN-like tribunal of attorneys that would govern legal disputes, enforce through international judgment complaints regarding governmental regulations and oversee adherence to corporate operations despite independent right of sovereign nations under international mandate.

Corporate control over natural resources through the use of international tribunals that will rule over environmental issues, land use, public health, and any and all laws or regulations foreign or domestic that apply. Those tribunals would be seated by private sector lawyers operating under the UN and World Bank (WB) demand for taxpayer compensation of domestic regulatory policies because corporations must be paid back for “expected future profits”

The TPP rewrites domestic law to fit international accord with corporate interest. Whether it is environmental or social issues, the TPP allows the end result to be in line with the profitability of the endeavor. All globalist schemes are wrapped up nicely in the TPP agreement. By empowering multi-national corporations, as they have done with the central banking cartels, the global Elite are ensured their one world government comes to fruition.