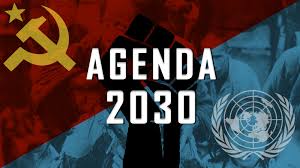 Did you know that the United Nations intends to have biometric identification cards in the hands of every single man, woman and child on the entire planet by the year 2030? And did you know that a central database in Geneva, Switzerland will be collecting data from many of these cards?

Previous articles have discussed the 17 new “Global Goals” that the UN launched at the end of September. This new agenda truly is a template for a “New World Order”, and if you dig into the sub-points for these new Global Goals you find some very alarming things.

For example, Goal 16.9 sets the following target… “By 2030, provide legal identity for all, including birth registration”
The United Nations is already working hard toward the implementation of this goal – particularly among refugee populations. The UN has partnered with Accenture to implement a biometric identification system that reports information “back to a central database in Geneva”

The United Nations High Commissioner for Refugees (UNHCR) is moving forward with its plans to use biometric technology to identify and track refugees, and has selected a vendor for the project. Accenture, an international technology services provider, has won out in the competitive tendering process and will oversee the implementation of the technology

The UNHCR will use Accenture’s Biometric Identity Management System (BIMS) for the endeavor. BIMS can be used to collect facial, iris, and fingerprint biometric data, and will also be used to provide many refugees with their only form of official documentation

these new biometric identification cards will not just be for refugees. According to a different FindBiometrics report, authorities hope this technology will enable them to achieve the UN’s goal of having this kind of identification in the hands of every man, woman and child on the planet by the year 2030.
The Identification for Development (ID4D) initiative was originally launched by the World Bank, and they are proud to be working side by side with the UN to get “legal identity” into the hands of all.

At some point will a universal biometric ID be required for everyone, including you and your family?And what would happen if you refused to take it?I could definitely foresee a day when not having “legal identification” would disqualify you from holding a job, getting a new bank account, applying for a credit card, qualifying for a mortgage, receiving any form of government payments, etc. At that point, anyone that refused to take a “universal ID” would become an outcast from society.
What the elite want to do is to make sure that everyone is “in the system”. And it is a system that they control and that they manipulate for their own purposes. That is one of the reasons why they are slowly but surely discouraging the use of cash all over the world.

Every time the elite propose something for our “good”, it somehow always results in them having more power and more control.
I hope that people will wake up and see what is happening. Major moves toward a one world system are taking place right in front of our eyes, and yet I hear very, very few people talking about any of this.

So where do you think that all of this is eventually heading?