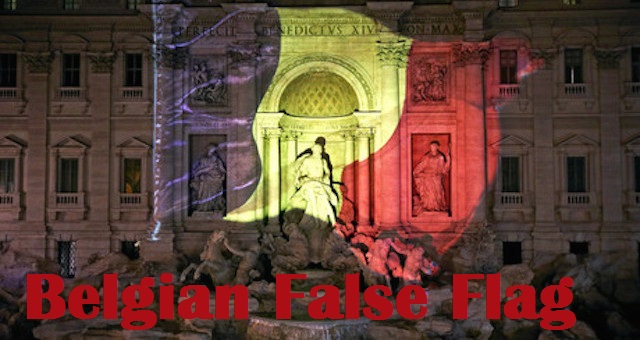 It used to be that Al-Qaeda had the conveniently timed Terrorist attacks. Now the new Runner’s up ISIS (ISIL, DAESH) are committing to attacks on western target’s 2000 miles away, instead of oh.. say traveling a couple hundred miles to NEVER attack their sworn enemy, Israel.
Is it also a coincidence, that ISIS terrorist’s would attack the same western Nations that are planning to involve themselves in the Syrian civil war? Now that ISIS is losing it’s fight against the current (legitimate) Syrian regime, wouldn’t it be short of a miracle that these NATO nations would now involve themselves in the conflict to destroy ISIS enemy? Or maybe that’s been the plan all along?

The terrorist attacks at Brussels airport and metro station (coincidentally next to NATO and EU headquarters) has all the hallmarks of a false flag event – designed to further the New World Order agenda to push through Orwellian domestic laws, surveillance, and justify ongoing wars in the Middle East.

As to the location of the bombing, How convenient for NATO then that a terrorist bomb should just happen to go off right near their headquarters.The Brussels attack occurred, obviously, in the capital of the European Union. Now we have a “war on Europe”.
The timing of this Brussels attack is convenient for quite a few reasons. Firstly, it comes 5 days after Turkish dictator Erdogan predicted that Brussels could be the next bombing target after Ankara.
“there is no reason why the bomb that exploded in Ankara cannot explode in Brussels, in any other European city.”

Was this foreknowledge showing that Brussels is a false flag operation?

Multiple Intelligence agencies warned the Belgian government of the possibility of future attacks.Belgian Law enforcement authorities knew of specific threats but did nothing. 2 of the 3 alleged suicide bombers were previously arrested by Belgian Law enforcement, and one was allowed to travel freely back into The Netherlands, even as a known Terrorist suspect.

Once again we are told that this is all just coincidence, that this was all an “un-imagined security failure”. Never mind that these attacks happen in the most heavily surveilled nations on the planet, which will conveniently argue for MORE surveillance of society in order to combat future “terrorism”.

And of course the Mass media’s role in all of this can not be ignored. Within hours of the event’s taking place the mass media released fake CCTV “evidence” and dubious images of the suspects prior to the bombings. Official press releases detailed the chain of evidence that the bombers were so careful to leave behind and implicate them with ISIS.

If ISIS Was Indeed Behind The Attacks, Who Is Behind ISIS? (Something To Think About)

A year ago on March 20th, 137 people were killed from terrorist activity in Yemen, yet no mainstream media headlines. A few days before that, 33 were killed in Afghanistan, the list is very large and goes and and on. Why is it that only certain terrorist attacks are picked up on and covered in depth by western mainstream media? Something to think about.

There is enough documentation out there to support the position that ISIS,and the syrian rebels have been created by the U.S. Military and NATO. And so It’s important to contemplate whether these constant attacks, especially overseas, are a result of incompetence, or Washington’s complicity in protecting the terrorists.