In September 1946, President Harry Truman authorized a program called Operation Paperclip, which aimed to lure scientists from Nazi Germany to the United States following World War II. Officials at the Office of Strategic Services (the predecessor to the CIA) recruited German scientists to America to aid the country’s postwar efforts, which would also ensure that valuable scientific knowledge would not end up in the hands of the Soviet Union or the divided East and West Germany.

Operation Paperclip’s most famous recruit was rocket scientist Wernher von Braun, who would go on to mastermind NASA’s Apollo moon missions. The lesser known history of Project Paperclip was that it also sheltered known Nazi War criminals and Nazi Intelligence agents, who were given immunity after the war.

Some Paperclip scientists came to be involved with Project MK-ULTRA, America’s twisted foray into mind control and radiation research , as the Nazis had been carrying out the exact same sorts of research, but without any of the pesky moral and ethical encumbrances that supposedly limited this kind of work in the United States. 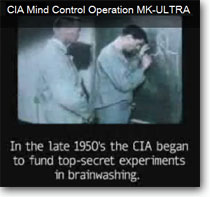 During the Cold War, the CIA initiated Project MK-ULTRA, a secret and illegal human research program to investigate potential mind-control systems. The program’s operators examined the effects of hypnosis, biological agents and drugs, such as LSD and barbiturates, on human subjects. Some historians suggest the program was designed to develop a mind-control system that could be used to “program” the brains of potential assassins. MKULTRA included 149 subprojects, almost all of which focused on Mind Control/Psychological Warfare through various methods such as Drugs,Electro-shock trauma,and Black magic.
In 1973, then-CIA director Richard Helms ordered that all documents from Project MK-ULTRA be destroyed, but a formal investigation into the program was launched several years later. 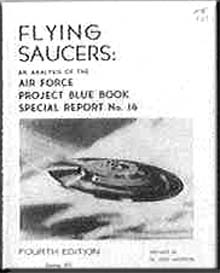 Project Grudge was a short-lived program launched in 1949 to study unidentified flying objects. The mission followed an earlier program, known as Project Sign, which published a report in early 1949 stating that while some UFOs seemed to be actual aircraft, there was not enough data to determine their origins.

Critics of Project Grudge said the program solely set out to debunk UFO reports, and very little actual research was conducted. In his book on the topic, Edward J. Ruppelt, Air Force Captain and director of Project Grudge, wrote: “It doesn’t take a great deal of study of the old UFO files to see that standard intelligence procedures were not being followed by Project Grudge. Everything was being evaluated on the premise that UFOs couldn’t exist. No matter what you see or hear, don’t believe it.”

Project Blue Book was the successor to both aforementioned projects and was the most publicly visible of the three. The project continued for another 11 years and was finally terminated in 1970. Concluding that a majority of the UFO were Misidentifications. However, A small percentage of UFO reports were classified as unexplained, even after stringent analysis. 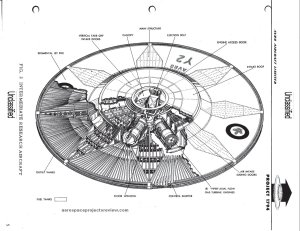 In late 2012, the U.S. Air Force declassified a trove of documents, including records of a secret program to build a flying saucer-type aircraft designed to shoot down Soviet bombers. The ambitious program, called Project 1794, was initiated in the 1950s, and a team of engineers was tasked with building a disc-shape vehicle capable of traveling at supersonic speeds at high altitudes.

The declassified documents reveal plans for the plane to reach a top speed of Mach 4 (four times the speed of sound), and reach an altitude of 100,000 feet (30,480 meters). The project’s estimated cost was more than $3 million, which in today’s dollars would be more than $26 million. Project 1794 was canceled in December 1961 after tests suggested the flying saucer design was aerodynamically unstable and would likely be uncontrollable at high speeds 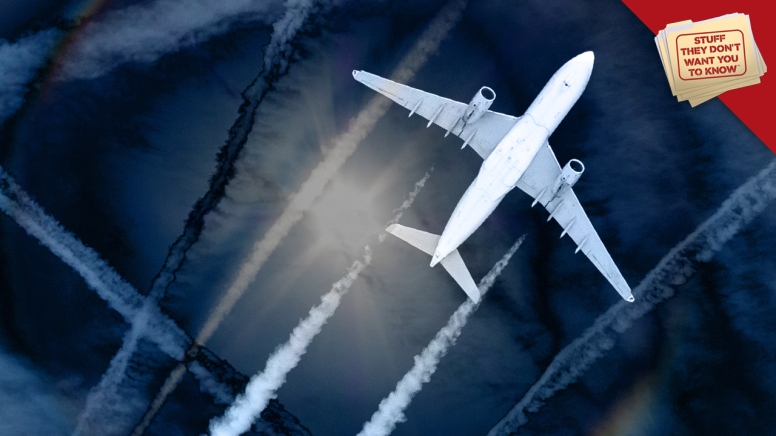 The reality of Climate engineering and more specifically Aerosol delivered geoengineering is a truth that can be easily verified with a just a few minutes of research. So how much of a stretch is it really that the “Chemtrails Conspiracy“, is somehow related to such a widespread and planned out program. The debate will continue on from both sides to the reality and Non-reality of such a program.
However,it’s up to you dear reader to do your own homework and draw your own conclusions. It’s been proven that the U.S. Government has run countless secret experiments against it’s own citizens, and plans on weaponizing weather modification related programs. So take these latest developments with a grain of salt and see where the conclusion leads you.

A new study by the University of California Irvine has apparently debunked the “chemtrails conspiracy” once and for all.
According to the Carnegie Science Center(Of the Elite Carnegie family name), there is no evidence of a secret, large-scale atmospheric spraying program by the government.

The study: Quantifying expert consensus against the existence of a secret, large-scale atmospheric spraying program, was published in the journal Environmental Research Letters.

*(As a side note the actual physical analysis results of the test subjects collected, is not a unanimous No against chemtrail spraying, in fact most of the test results are split or showed higher than normal concentrations of heavy metals in the test sample’s) 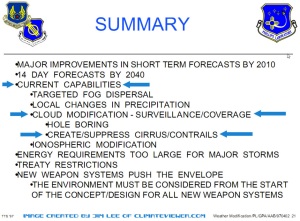 The U.S. Air Force has recently admitted that the chemtrail concept exists and is essential in helping them advance military technology.
A recent Air Force plan in concept would be to detonate plasma bombs in the Earth’s upper atmosphere using a fleet of small satellites to “improve the range of radio communications“. A related project from a team at Enig Associates and the University of Maryland,is working to develop a plan that would “heat metal by detonating a small bomb,” using the blast to create electrical energy. Similar efforts were made by researchers working with the High Frequency Active Research Program, also known as (HAARP), in Alaska.(Which is said to have been involved in Geoengineering).

HAARP is thought to be the driving force behind weather and jet stream manipulation. Emitting powerful radio frequency signals into the atmosphere. According to Dane Wigington of Geoengineering Watch.
“The dangers we face from global climate engineering are not only from the atmospheric saturation of highly toxic aerosols, but also from the constant bombardment of extremely powerful radio frequency signals that are also permeating our atmosphere from the clouds to the ground all over the planet.” 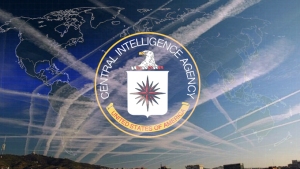 John O. Brennan gave a historical speech to the Council on Foreign Relations, admitting that the concept of Chemtrails are very real. In the June 2016 speech, Brennan addressed threats to national and global security, But what has raised many eyebrows is Brennan’s discussion of geoengineering.Brennan did not state that geoengineering was currently being conducted, he did go into some discussion about the possibility of geoengineering in the near future.

“Another example is the array of technologies—often referred to collectively as geoengineering—that potentially could help reverse the warming effects of global climate change. One that has gained my personal attention is stratospheric aerosol injection, or SAI, a method of seeding the stratosphere with particles”.

“As promising as it may be, moving forward on SAI would raise a number of challenges for our government and for the international community. On the geopolitical side, the technology’s potential to alter weather patterns and benefit certain regions at the expense of others could trigger sharp opposition by some nations,And, as with other breakthrough technologies, global norms and standards are lacking to guide the deployment and implementation of SAI”.

It must must be made clear that Brennan did not state that geoengineering was currently taking place or that he made mention of chemtrails, it is important to note that he essentially described the process of chemtrailing and geoengineering in a speech that was designed to discuss possible threats to global security in the near future.

Sources via Your News Wire 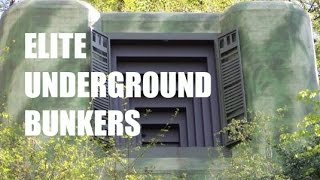 According to former Facebook product manager Antonio Garcia Martínez, Newly wealthy elites have set-up private groups on the social media giant in order to discuss the “pressing needs of the super rich,” including where to buy private planes and “how to buy a bunch of land then put it in a trust so people don’t realize you’re amassing a compound and you can maintain your privacy.”

It was recently revealed that Facebook CEO Mark Zuckerberg is building a 6 foot wall around his $100 million property located on the Hawaiian island of Kauai.
“The feeling of it is really oppressive. It’s immense,” Kauai resident Gy Hall told Time.

Elitists elsewhere have also been busy buying airstrips and land in remote areas of countries like New Zealand as an insurance policy against the chance of mass civil unrest and economic catastrophe. Economist Robert Johnson said the rich were making such purchases “because they think they need a getaway” from Ferguson-style riots that will erupt as a result of widening wealth inequality, which it at its worse in virtually all developed countries since the 1980s.

Vogue amongst those who can afford it is the expanding industry of Luxury underground bomb shelters. a company called Vivos that builds luxury bomb-proof underground shelters said they were receiving a lot of interest from “high net worth individuals” who were looking to be protected from “the general public”.

Millionaires have also been fleeing from major cities like Chicago due to concerns over racial tensions and rising crime rates, while the wealthy are also installing panic rooms in their big city apartments for the same reason.

The “Elite’s” are just only catching up with world governments which have already established Deep underground Military Bases, Which leaves us the general public to ask,Why is all this preparation and secrecy happening, what are we being excluded from preparing for??