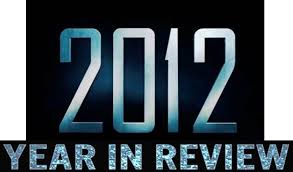 The TV Networks are hard at work in this last week of the year recapping their best footage to remind us where we’ve been. Researchers are combing the archives to find the best images for their annual greatest hits “package” which usually ends with a photo-montage driven by music of the politicians, entertainers and personalities who died in 2012.

As we watch, we ooh and ah and remember calamities that struck us like that well-named “Franken (for that movie monster Frankenstein) Storm” Sandy and the shooting of the children at Sandy Hook in Connecticut. They will replay the 2012 presidential elections that bring us to the stalemate we are stuck in, what’s been labeled the “fiscal cliff.”

Oh, you know what else they will show–the year of iPhone 5 and iPad 3, the Olympics, and Gangnam Style.

When it comes to the world, there will be a reference to the war on Iran that wasn’t, and the war that is ripping Syria apart. We may hear about China’s new leader, the mess in Mexico and Hugo Chavez’s electoral victory and battle with cancer. The deaths in Gaza will be omitted.

Those of us who hoped the Obama reelection might usher in a little more justice and equality remain disappointed. Those of us who longed for a change we could believe in then took to the streets to try to create it, only to confront the power of the police state–the NYPD, FBI, et al. Only now, with the disclosure of new documents, do we have a hint of how we were spied upon and lied to.

All of our “news” deals with specific stories and events—not trends and less visible forces that drive our economy and political system. We hear about issues, not interests. The newscasts lack context, background, analysis and interpretation. They are there to dumb us down, not smarten us up.

Anyone worried that the world will come to an end Friday (Dec. 21) can scan the heavens online over the next two days for any signs of death from above.

The online Slooh Space Camera has been broadcasting a series of live cosmic views all week, beginning Monday (Dec. 17). The free webcasts aim to help the public keep watch for any monster solar storms, impending asteroid strikes or other potential agents of the so-called “Mayan apocalypse” that doomsayers claim is set for Friday.

“Rather than merely offer scientists’ dismissals of the many silly doomsday scenarios that have now been heard by almost everyone in the world, and which have reportedly produced panic in Russia, Slooh will take a ‘let’s see for ourselves’ attitude,” Astronomy Magazine columnist Bob Berman, who has been participating in the shows, said in a statement.

“By acting independently of any government agency, which assumedly would be disbelieved by the millions who are convinced a giant cover-up is in place, Slooh will observe the planets and the ecliptic plane for anything out of the ordinary.

But Friday is a date of celestial significance, whether or not you believe in the doomsday scenarios. It’s one of the year’s two solstices, marking the start of winter in the Northern Hemisphere and the beginning of summer in the South. (The other solstice occurs in June.)

At the winter solstice, the sun pauses briefly after reaching its most southerly point in the sky. Thereafter, it begins to head northward once again as part of its annual cycle. Indeed, the word “solstice” is derived from the Latin sol (“sun”) and sistere (“to stand still”).