Former Texas Representative Ron Paul has issued a warning, on the heels of president elect Donald Trump’s successful bid for the White House, to beware of the shadow government pulling political strings behind closed doors.

Paul made his remarks in an interview with Peter Lavelle, when asked what foremost issues should be on the mind of Donald Trump right now. Paul answered, “who he appoints to the cabinet,” should be one of the first things the billionaire turned politician must address.

“Quite frankly, there’s an outside source which we refer to as the Deep State or a Shadow Government. There’s a lot of influence by people that are actually more powerful than our government itself,” he said referring to U.S. meddling with international elections around the world.
“If the government’s not acting right, it’s the secret government, it’s the shadow government, it’s the CIA and the false flags and the accidents that happen and then the people get angry, because if you don’t get angry at your enemies, then you’re unpatriotic.

Paul says he’s optimistic because the media and the government have been exposed. “Don’t believe the government,” Paul implored. He said he wants government to “be very very small” and said if we did we would have a “more peaceful world.” 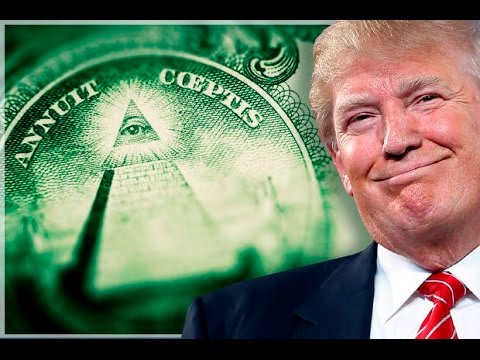 Is Donald Trump a New World Order stooge designed to fulfil the agenda of the Rothschilds?

Presidential candidate and GOP front-runner Donald Trump has connections to some of the most wealthy and elite families in the world, including families commonly referred to as “illuminati” who have been accused of trying to bring about a new world order via their control of world finances, politics and media.

Trump is no exception in this Rothschild connection. We know insider Trump has socialized and cut business deals with the wealthy Manhattan elite for decades. It has been insider Trump that has been pushing the hard line ofIslamophobia within America, to fan the flames of hate against all Muslims. Many have theorized that Trump is actually running to split the vote and throw the election to career criminal Hillary Clinton. Luke Rudkowski (We Are Change) recently exposed how Trump is turning to the CFR for military and foreign policy advice.

Nothing is black and white, but given Trump’s copious ties to NWO-related people and agendas, it’s a stretch to call him an outsider, even if he may not be a full insider. Newt Gingrich slipped up on the MSM (Mainstream Media) recently when he revealed that Trump was not an insider because he was not part of the club and had not “been through the initiation rites” – with an obvious admission that Secret Societies like Freemasonry, Skull and Bones, Bohemian Club, etc. run the show.

Trump is most assuredly connected to the most powerful groups in the world through his business dealings. In a related article Who Towers Behind Trump?, Michael collins Piper reveals how Trump acquired 93% of the voting stock in gambling company Resorts International in 1987:

“Resorts International was established and controlled by front men for the Rockefeller and Rothschild families and their “enforcers” in the Central Intelligence Agency (CIA) and its allied intelligence agency, Israel’s Mossad. In 1987, upon the death of longtime CIA front man James Crosby, the nominal head of Resorts International, up-and-coming young New York real estate tycoon Donald Trump stepped into the picture and bought Crosby’s interest in the gambling empire.”

Career politicians make a living learning how to become most electable and how to best appeal to voters. Their ambitions, career and income all depend on it. Depicting yourself as agent of change, or an outsider, is a very obvious tactic of politicians who want to get voted in. However, at this stage in the game, the general public all over the world has been so massively hoodwinked and deceived for so long that it would be wise to be extremely skeptical of any politician making the “outsider” claim. Importantly, the voting public needs to do its homework to check out and investigate the history and connections of any would-be leader, especially outsider Trump, or insider Trump.

A slip of Truth in the midst of campaign hype and lies. This is not an endorsement of Donald Trump, even though he may not be an establishment insider, he is a an elitist oligarch with his own agenda.

Former Speaker of the House Newt Gingrich told Fox News’ Bill O’Reilly that the establishment is scared of Donald Trump because he “didn’t belong to a secret society” and wasn’t involved in any of the rituals associated with such groups.

Discussing Mitt Romney’s anti-Trump speech , Gingrich said it represented “the panic of the establishment wing of the (Republican) Party,” and that the prospect of Trump becoming the nominee “absolutely drives them crazy”.

When asked why, Gingrich responded, “Well because he’s an outsider, he’s not them, he’s not part of the club, he’s uncontrollable, he hasn’t been through the initiation rites, he didn’t belong to the secret society.”

Gingrich is in a perfect position to know about “secret societies” given his affiliation with Bohemian Grove, an annual encampment that takes place every year in Monte Rio, California and is attended by some of the most powerful people in the world.

Via The Daily Sheeple