The truth is slowly becoming stranger than fiction in the modern police/warfare state. Recently declassified information about an experiment out of the little known Strategic Capabilities Office (SCO) backs up this notion and is cause for major concern.

For a bit of background history The SCO was launched in 2012 as a means of secretly strategizing for a war against China and Russia. Outside of this one video, they just released, very little is known about their experiments or weapons building.

Saber rattling with China and Russia is an insane and asinine move, but by releasing the video below, the US is doing exactly that.
Future warfare plans for China and Russia have slim chances of success in an overt confrontation, So longer term plans call for Asymetric and Even Robotic warfare.

Defense Secretary Ashton Carter disclosed the existence of Micro-drones that can be launched from the flare dispensers of F-16s and F/A-18 fighter jets traveling at the speed of sound. As the drones are released, tiny propellers provide them with the propulsion they need to find each other and create a swarm.

The idea of weaponized swarming micro-robots deployed by one of the most destructive governments in the history of the world — shocks the conscience. However, the war-mongering bureaucrats in D.C. are patting themselves on the back and using the release of this video to justify stealing even more of your tax dollars.

The notion that the US is preparing for the rise of threats across the globe rings hollow to those who’ve been paying attention and realize that the US creates the conflicts only to play the role of savior — an ostensible measure used to enrich those who profit from war.

Via: The FreeThought Project

Police are now voicing their concerns about domestic drone use — specifically, they want the option to be able to employ weaponized drones in the future, should the need arise.
As if police brutality and aggression weren’t already an epidemic in the United States, police departments in Connecticut oppose a bill to outlaw the weaponization of drones. The bill also addresses unmanned aerial vehicles fitted with cameras, and their potential to violate the privacy rights of individuals. But law enforcement departments in the state appear far more concerned with being deprived of the possibility of arming them with weapons, rather than cameras.

In 2015, North Dakota passed a law granting police the right to arm drones with “less than lethal” weaponry. Quietly slipping under the radar of the public and the media, the bill as originally written by its sponsor, Representative Rick Becker, banned all weapons on police drones — until a powerful police lobby had its way with the original draft. ‘less than lethal’ is quite a misnomer. Besides maiming and seriously injuring people, many of those options can also be fatal — particularly Tasers.

Police made the argument that armed drones in law enforcement could be an effective weapon for public safety.
“We’ve had a report that somebody’s going to fly a drone into an airplane, into an engine, or it’s a weaponized drone,” Farmington Police Chief Paul Melanson said. “We’re concerned and we don’t have those answers yet.”

Joining the battle to prevent police spying by drone, the ACLU was slated to testify about the Connecticut bill on Tuesday. ACLU of Connecticut testified against allowing police to arm drones, saying it could open the door even more to excessive use of force.

*Seizing upon the opportunities of new technologies, It’s time for the government to restrict your use and access, While they have the ability to arm the same technology with weapons and riot control functions and use it against you.

Assemblyman Mike Gatto a California lawmaker introduced legislation this week that would require owners of drones to get insurance and license plates, similar to the requirements for motor vehicles. The bill is called the Drone Registration/Omnibus Negligence-prevention Enactment (DRONE) Act of 2016 and would tighten the restrictions on personal drones even further than they have been already. The bill has technical requirements as well and would require all personal drones to be tracked by GPS and an automatic shut off to prevent them from crossing paths with airplanes.

the FAA has recently begun to require owners of private drones to register with the government and pay a registration fee. To make matters worse, their personal information will be exposed in the process.

The privacy concerns surrounding drone registration has grown with the FAA’s admission that the registration information would be available to anyone with an Internet connection. This means that addresses and other sensitive personal information of drone owners would be publicly listed, creating an obvious safety hazard. The FAA says that the names and addresses would not be searchable; however, if you have the number to someone’s drone, you can easily pull up their address and other personal information.

The registration move was just the beginning of a slippery slope that will quickly bring far-reaching, local, state and federal restrictions on drone operators.

Consent or Die!! Welcome to the new Amerika!

Professor William C. Bradford, assistant professor from the U.S. Military Academy at West Point recently declared that professionals critical of the “War on Terror” constitute a “treasonous” opposition that should be subject to military force.

He believes the U.S. should have the right to attack people who are critical of U.S. military operations — specifically, professionals, legal scholars, journalists, and other people effectively spreading ideas that oppose war.

Using the excuse that victims would be “lawful targets,” Bradford argues that “law school facilities, scholars’ home offices and media outlets where they give interviews” should be targeted with military force to suppress dissent. He asserted that the war on terror should be expanded, “even if it means great destruction, innumerable enemy casualties, and civilian collateral damage.”

Ironically, Bradford has a Master of Laws (LL.M.) degree from Harvard University with a focus in Human Rights Law.
This is a man who is apparently incorporating his violent philosophy into his teaching at West Point. He started on August 1st 2015 — after he published his article.

This is only the tip of the iceberg in forming a complete understanding of the ideological fabric held by many of the war hawks in U.S. Military. 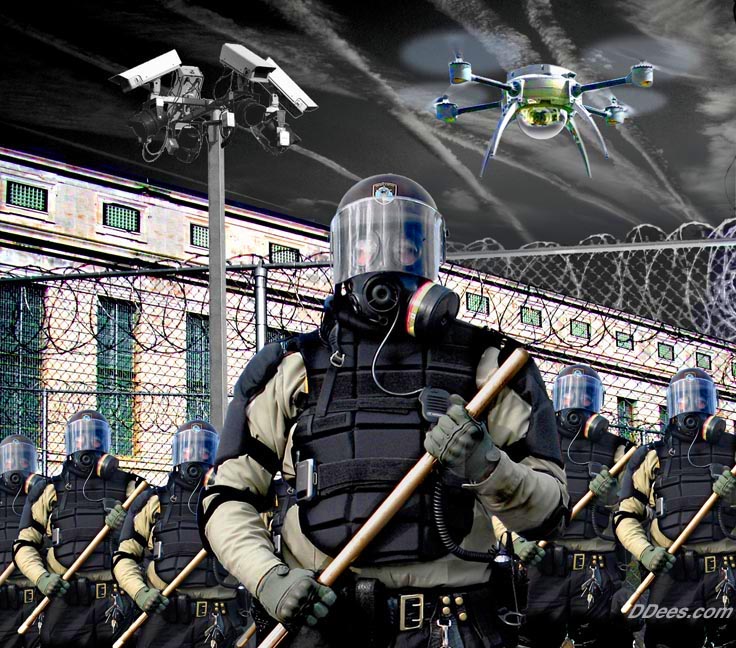 *One more victory for the Technocratic Police State that is developing and enveloping all around us. How long until this creeps into the “domestic Terrorism” surveillance realm? any bets?

Thanks to a last-minute push by a pro-police lobbyist, it is now legal for law enforcement in North Dakota to fly drones armed with ‘less lethal’ weapons such as rubber bullets, tear gas, tasers, sound cannons and pepper spray. State Rep. Rick Becker introduced H.B. 1328, the law both banned weaponized drones and established a procedure for law enforcement to seek a warrant before using drones in searches. Only the warrant requirement survived.

The American Civil Liberties Union argues that police drones are a new kind of threat to that compromise between security and liberty. The group supports laws to restrict law enforcement’s use of them, and makes a compelling case that absent such restraints the technology is fundamentally at odds with the Bill of Rights.

Law enforcement and their union lobbyists are assuring lawmakers that drones would only be used in non-criminal situations, like a missing person case or for photographing crime scenes. This begs the question of why they would need such ominous legislation if they say they’ll never use it?

“Less lethal weapons” can kill. At least 39 people have been killed by police Tasers in 2015 so far, according to The Guardian. Bean bags, rubber bullets, and flying tear gas canisters have also killed and maimed people in the U.S. and abroad.

University researchers in Texas say they are designing a new type of drone – one that could be controlled simply and only with a soldier’s mind.If successful, the project would allow soldiers to command future drones in ways beyond simple navigational commands. While troops would be able to order a drone to “move left” and “move right,” it would potentially enable them to command the vehicles to travel over specific geographic installations and send critical data back to their operators.

While the goal of controlling vehicles by way of the mind is still ways off, the hope is that by studying brain signals and magnetic waves, the researchers will be able link the activity to specific commands that can eventually be received by an advanced drone.

These commands would be relayed by sophisticated electroencephalogram systems (EEG) that can process brain signals.
Once developed, mind-controlled drones would significantly reduce the amount of supplies that troops have to carry into combat zones, the chairman of the university’s electrical and computer engineering department, Daniel Pack, believes.

While the project is primarily funded by the Department of Defense and the Office of the Secretary of Defense, the researchers also think the technology will have important uses for those with disabilities.( way to put a cushy “humanitarian twist in there)

The always-innovating Los Angeles Police Department is testing a potential addition to its fleet of vehicles: a military-grade electric motorcycle.

Designed “exclusively for military use in the US Special Operations Forces,” the Zero MMX runs almost silently and can operate on and off-road for up to 164 miles on a charge, according to a press release by the manufacturer. Capable of traveling in over three feet of water and producing 68 pound-feet of torque, the stealthy vehicle reaches a top speed of 85 MPH.

Electric motorcycles are not the only vehicles the LAPD may use in coming years. In May, the department received two unmanned aerial vehicles from the city of Seattle. Originally purchased for $82,000, the city eventually banned their use after a lawsuit by the Electronic Frontier Foundation informed the public of their existence. The drones were then given to Los Angeles.

Purchasing equipment intended for military use is becoming more common among American local police forces. Mine-Resistant Ambush Protected vehicles, otherwise known as MRAPs, are increasingly handed out by the Pentagon to localities across the country.

Late last month, the LAPD received two Draganflyer X6 unmanned drones as a ‘gift’ from the Seattle Police Department, in what seems to have been an effort by the latter to avoid public uproar.

Beck responded to criticism of the plans by human rights and privacy groups by explaining that the technology is already “in the hands of private citizens” and corporations, so why shouldn’t law enforcement experiment with the devices as well?