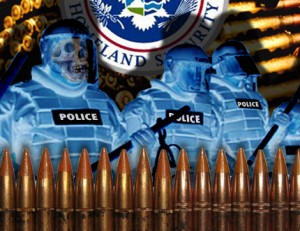 Whether you are for gun control or the right to bear arms, let’s agree to be honest.

The federal government has recently purchased hundreds of millions of rounds of hollow point ammunition for use within the United States. (And purchases are allegedly ongoing.)

Senators Dianne Feinstein and Harry Reid have carried concealed weapons to protect themselves.

And the newspaper which published the names and addresses of gun owners has itself hired armed guards to protect it.

So folks within government who are advocating gun control are only advocating that the American people be disarmed.

They not only reserve to themselves the right to carry weapons, but the government is buying insane amounts of weaponry for use within the United States. Indeed, police forces throughout the U.S. are being armed with military weapons.Whatever you think about gun control, please acknowledge the objective situation: our government is becoming more and more armed, while it is asking us to disarm ourselves.

Therefore, whatever you think about gun control, you have to admit that the government is asking us to trust it, as it becomes armed to the teeth and asks us to give up our arms.

Given recent actions by folks in government (and the consolidation of power), do you trust our government?

Given that our government unjustifiably murders children abroad without even knowing who they are, do you trust it to only use arms against people who are violent? But let’s all be honest about one issue … and admit that we are being asked to trust our government – working hand in glove with the big banks – as they arm themselves to the teeth.

Vice President Joe Biden told viewers just moments ago that President Obama would go as far as to signing an executive order to continue the agenda of gun law and reform.

“The president is going to act,” Biden acknowledged. Going on to detail, “There are executives orders, there’s executive action that can be taken. We haven’t decided what that is yet. But we’re compiling it all with the help of the attorney general and the rest of the cabinet members as well as legislative action that we believe is required.”

Biden continued on, “As the president said, if you’re actions result in only saving one life, they’re worth taking. But I’m convinced we can affect the well-being of millions of Americans and take thousands of people out of harm’s way if we act responsibly.”

As many know, an executive order that curbs any gun possession is a direct violation of natural rights.

Think..in the end who benefits the most from violence and from Gun control?

Sen. Barbara Boxer (D-Calif.) is proposing allowing governors to use National Guard troops to increase security at schools in the wake of the Newtown, Conn. shooting.

Boxer, who said the legislation is modeled after a previous law that had National Guard troops help with border security, would allow governors to decide how troops would be used at schools. While a governor already has the power to send troops to a school, the legislation would allow for the governors to access federal funds for those troops, she said.

While not ruling out the possibility of military-clad National Guard troops at school entrances, Boxer also said those troops could be used to help improve infrastructure at schools or relieve police officers from desk work that would allow the police departments to assign more cops to schools.

“Is it not part of the national defense to make sure our children are safe?” Boxer said.

Boxer said she has not spoken with any of her colleagues or with the White House, which today is announcing a task force to look at gun control.

Boxer said her proposed legislation is in response to recent calls that teachers and school officials be allowed to carry weapons in order to protect schools.

“I believe in protecting our schools with trained law enforcement,”

(Leave it to a lefty democrat statist to insist that a Citizens right to defend themselves, should be the sole property of the State.Once again politicians seizing on an oppurtunity to push forward their agenda’s and to exploit the public’s fear, or rather mass manufactured hysteria)